Founded in 1981, Computacenter quickly became a FTSE 250 company serving over four million end users in 30 languages. With over 16,000 employees, 97 offices and a presence in 13 countries, they began to experience a key challenge due to this growth - a truly global business with an inconsistent country-specific approach to recognition and reward.

Some countries had physical thank you cards and monetary vouchers to recognise employees, but this process was highly manual and time-consuming. As more teams grew internationally, they found it near-impossible to ‘publicly’ recognise or reward each other for outstanding contributions.

For a company becoming more globally connected, they decided it was time to create a group-wide unified recognition and reward platform to reach all their people, everywhere.

In 2019, they outlined their challenges and requirements in a tender, which Rippl successfully won. Led by Caroline McCoy, Computacenter’s Reward Manager, the two businesses set out on a project to launch a version of the Rippl Incentives, Recognition and Reward Platform, which Computacenter branded – “Bravo”.

From customisable e-recognition cards and peer-to-peer nomination campaigns to the social timeline and news feed, Bravo provides a one-stop shop for employees to feel valued, informed and connected. Most importantly, the platform is accessible via a mobile-enabled app, meaning their frontline employees have the same access as ‘desked’ employees.

Industry research from Oxford Economics states that a leaver can cost a business anywhere between £3,874 and £6,630. When taking this into consideration, Computacenter is likely benefitting from substantial cost savings in increasing staff retention.

Shortly after the 2020 launch, the overall adoption rate across the group stood at 44.4%. This has now risen to 77.5%, with countries including the UK, South Africa, and Mexico exceeding 85%.

When analysing managers’ response to the programme, the average number of quarterly manager awards has increased by 38% in 2021, and award card allocation being used has increased from 61.7% in 2020 (during the first year) to 67.6% in 2021.

What about the overall engagement on the platform since launch? Almost 10k employees have been recognised, more than 24k recognitions have been sent, attracting 17.5k comments and 67k 'likes'. Nearly all activity has increased year on year (such as the average number of employee recognitions rising from 1.2k in Q2 2020 to 1.5k in Q2 2021), so we only expect engagement to grow further. 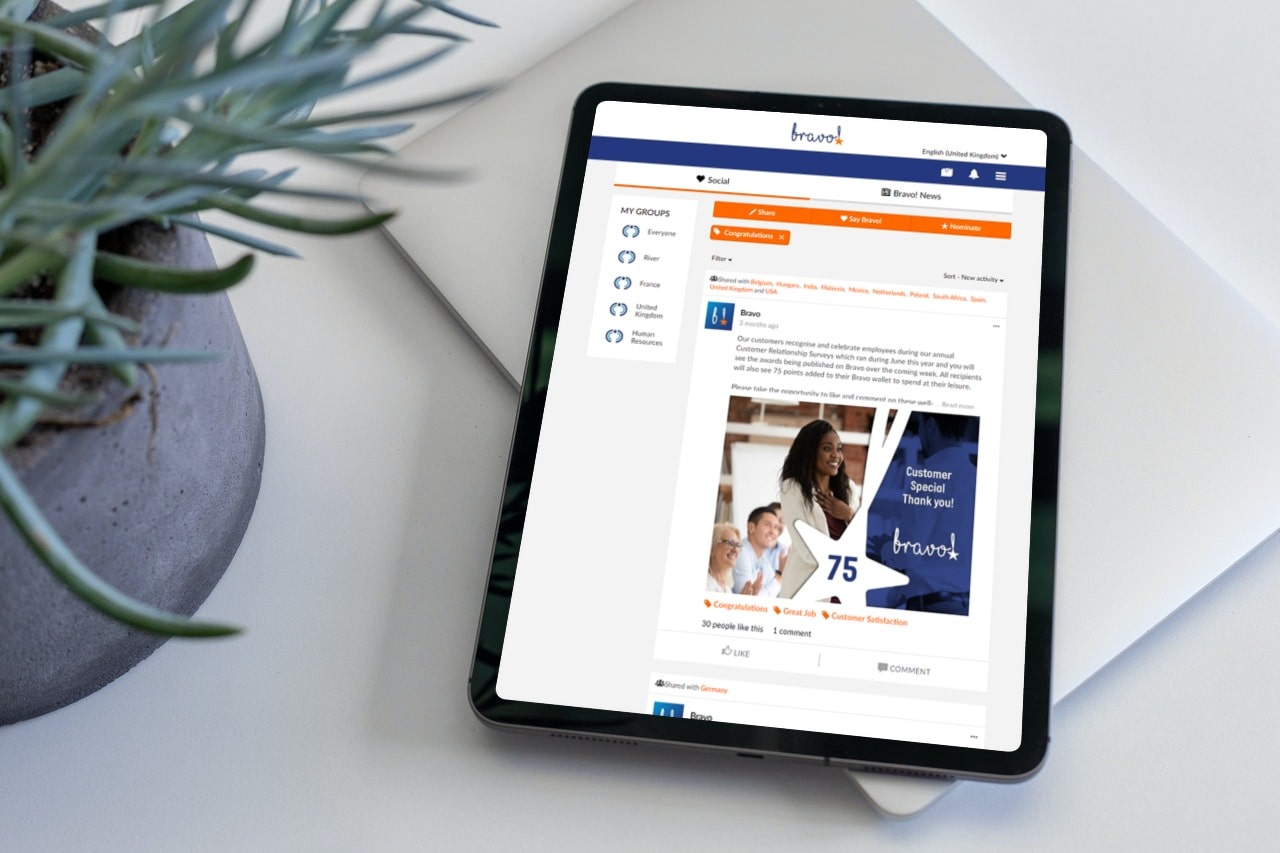 There is a vast complexity to distributing rewards globally due to cost of living differences, but the platform manages this seamlessly. Rewards in Bravo are distributed in points, and bespoke calculations are made in the voucher catalogue to account for variances by country, meaning a Mexican employee receives the same value from their reward as an American employee. This functionality highlights the true effort from the organisation to move away from the long-forgotten local approach to recognition and reward, adopting a consistent and fair approach.

The Top Employers Institute recently recognised Computacenter out of 1,700 certified German employers for demonstrating best practice in driving engagement with a modern recognition and reward platform.

Senior stakeholders share feedback on how the business is benefitting from Bravo: “There’s no admin delays and it’s more convenient than previous recognition cards as you get to enjoy the monetary reward” - Christophe Charpentier - Global Service Desk Director, Spain.

“The visibility of achievements is fantastic and encourages the behaviours of recognition not just for individuals but teams too! The platform has created a positive and infectious way of providing feedback which is continuing to grow across Computacenter.” - Sarah Dial - Senior HR Business Partner, UK.

“The fact that managers are empowered to choose who they award the Bravo cards to and colleagues alike are able to suggest award recipients creates a culture of recognition not only from a top-down perspective, but through lateral team perspective” - Sanjeev Nadarajan - Delivery Enablement - APAC Lead, Malaysia.

Computacenter has invested in the Rippl platform with the “Bravo Stars Award Programme” to continuously improve their centralised strategy. This global nomination initiative allows colleagues to nominate each other for a bronze, silver or gold award; each with significant monetary reward. To highlight outstanding Computacenter employees, nominations go through an approval process with several managers, ensuring that only the most exceptional contributions are rewarded.

“The Bravo Stars Award Programme will enable us to foster a high performance culture with spot awards available to all employees as an additional component to reward our employees besides the classical elements of an annual bonus for senior staff” emphasises Tanja Eschke, Computacenter’s Group Head of Reward.

For a business that continues to grow globally, the Bravo recognition and reward platform has become imperative to empowering managers and employees to appreciate the workforce's contribution.

As the platform continues to build momentum, Computacenter looks forward to seeing engagement grow between teams to support overall performance across the business.